Portland Cement and Its Manufacturing

Portland Cement and Its Manufacturing 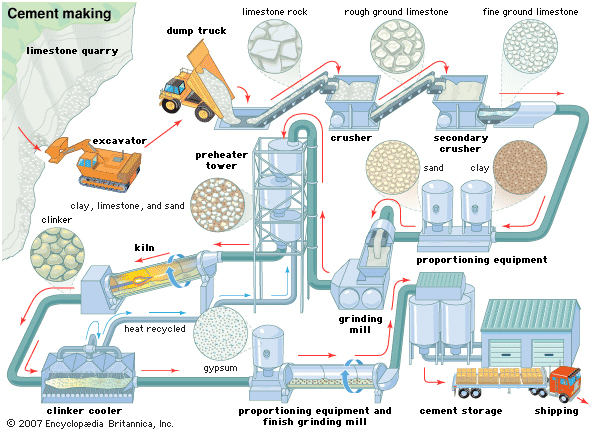 Portland cement (PC) is a fine powder which is produced by heating limestone and clay minerals in a kiln and forms clinker. The clinker is grinded to fine powder with addition of small amount of other materials. It is the most commonly used types of cement in the world. It is used as basic ingredients of concrete, mortar, stucco etc. It is named as Portland cement because of its similarity to Portland stone which was found on the Isle of Portland in Dorset, England.

It is invented by the Joseph Aspdin in 1824. But the credit for the invention of the modern Portland cement goes to his son William Aspdin in 1840s.

For the manufacturing of PC, materials from any two of these groups may be used but they must contain in proper form and proportions of lime, silica and alumina.

The raw material that is used in the manufacturing of Portland cement mainly consists of lime, silica, alumina and iron oxide.

In the cement, the oxide content is about 90%. The oxide composition of ordinary Portland cement is given below:

During the heating of raw material in the kiln, the oxides interact with each other and forms more complex compounds. The Portland cement consists of 4 basic chemical compounds. These four compounds are given in the table below:

It hardens rapidly on addition of water and responsible for initial set and early strength.

It hardens slowly. The effect of C3S on strength increases with ages beyond one week.

In first few weeks, it contributes in strength development. It hydrates first among all four compounds of the PC. Since it produces high heat and also reacts with soils and water that contains moderate to high sulfate concentrations, it is considered as the least desirable component of the PC.

It hydrates very rapidly but contributes very little to the strength of the concrete. It lowers clinkering temperature i.e. temperature at which clinker is formed.

The various production steps of the Portland cement are-