Types and Causes of Water Pollution

Types and Causes of Water Pollution

Water pollution is a major global problem which requires ongoing evaluation and revision of water resource policy all levels (international down to individual aquifers and wells).It has been suggested that water pollution is the leading worldwide cause of deaths and diseases, and India recorded the most number of premature deaths because of pollution in 2015 at 2.51 million lives lost, followed by China at 1.8 million deaths, a recent study has revealed. In India too, according to the study, air pollution was the major culprit.

An estimated 580 people in India die of water pollution related illness every day. Around 80% the water in the cities of India is polluted, and as of 2017. In addition to the acute problems of water pollution in developing countries, developed countries also continue to struggle with pollution problems.

Water is typically referred to as polluted when it is impaired by anthropogenic contaminants and either does not support a human use, such as drinking water, or undergoes marked shift in its ability to support its constituent biotic communities, such as fish. Natural phenomena such as volcanoes, algae blooms, storms, and earthquakes also cause major changes in water quality and the ecological status of water.

What is Water Pollution?

Water pollution is any chemical, physical or biological change in the quality of water that has a harmful effect on any living thing that drinks or uses or lives (in) it. When humans drink polluted water it often has serious effects on their health. Water pollution can also make water unsuited for the desired use. 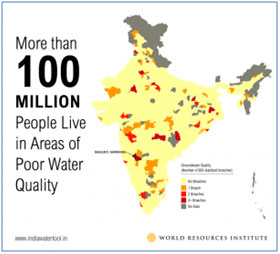 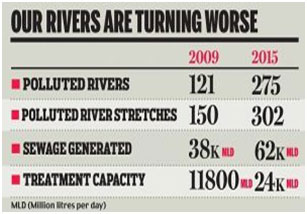 Point source water pollution refers to contaminants that enter a waterway from a single, identifiable source, such as a pipe or ditch. Examples of sources in this category include discharges from a sewage treatment plant, a factory, or a city storm drain. The U.S. Clean Water Act (CWA) defines point source for regulatory enforcement purposes. The CWA definition of point source was amended in 1987 to include municipal storm sewer systems, as well as industrial storm water, such as from construction sites.

Nonpoint source pollution refers to diffuse contamination that does not originate from a single discrete source. NPS pollution is often the cumulative effect of small amounts of contaminants gathered from a large area. A common example is the leaching out of nitrogen compounds from fertilized agricultural lands. Nutrient runoff in storm water from "sheet flow" over an agricultural field or a forest is also cited as examples of NPS pollution. Contaminated storm water washed off of parking lots, roads and highways, called urban runoff, is sometimes included under the category of NPS pollution. However, because this runoff is typically channeled in to storm drain systems and discharged through pipes to local surface waters, it becomes a point source

Where does water pollution come from?

Sewage and waste water: Out of sight, out of mind? Surfers will tally out that sewage contains all kinds of horrific, from sanitary products, paper, and plastics, to bacteria and viruses that can make you extremely ill.

Soaps and washing detergents: Phosphates in detergents can fertilize rivers and seas, causing algal blooms that use up oxygen and kill fish life.

Oil poured down the drain: You might think oil tankers make the most oil pollution, but quite a lot of oil enters water simply by being tipped (or washing) down the drain.

Atmospheric deposition: This is air pollution that returns to Earth as land and water pollution, including acid rain that falls in to oceans, rivers, and seas, chemical discharges from chimneys (smokestacks), and fly ash from waste incinerators. 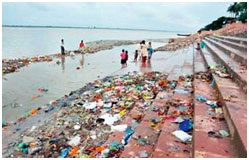 Highway and street runoff: Cars obviously wear out as they drive down roads—but it's less obvious that they wear out and leave toxic residues on the roads themselves. Heavy storms wash poisoned sludge off roads in to surrounding land where it drains into rivers or groundwater. 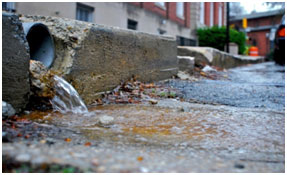 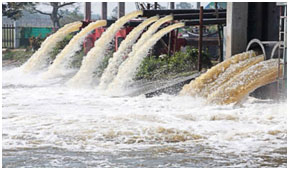 Oil production: Most oil is produced off shore and transported by ships, so it's no surprise that the oil industry is a big polluter. Despite the huge media attention they gain, tanker accidents account for only about10 percent of the total amount of oil that enters the oceans. 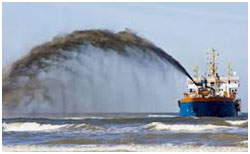 Understanding causes: If we don't understand why pollution happens, how can we hope to stop it? We need to know whether pollution is point source or non point source—and what causes it in each case.

Legislation: There are many different anti-pollution laws and agreements in operation in the United States, Europe, and worldwide. Examples include the US Clean Water Act, the EU Bathing Water Directive, and the MARPOL International Convention for the Prevention of Pollution from Ships.

Regulation: Sometimes pollution seems unavoidable from papermaking to oil refining, many industrial processes create pollution as a byproduct. But instead of accepting that as a fact, we can regulate factories and allow them to emit or discharge only limited amounts of carefully controlled pollutants. By slowly reducing the levels of permitted discharges, year by year and decade by decade, we can gradually bring pollution under control.

Effective enforcement: Laws and regulations are worth nothing unless we' prepared to Enforce them—and punish offenders with fines or jail sentences. This is part of an idea known as the polluter pays principle, which means people who produce pollution should have to pay the costs they inflict on society.

Public awareness: The more people know about the causes and effects of pollution, the more likely they are going to be to avoid adding to the problem. Community action to tackle pollution, such as voluntary clean up of rivers and beaches is very important.

Education: If we teach school children that pollution is a problem, perhaps we can avoid turning them into future polluters?

Political pressure: If we want to create laws and regulations that effectively tackle pollution, against the wishes of powerful companies; we are going to need ordinary people to apply considerable pressure to their elected political representatives.

Cooperation: It's easy to point finger sand blame "greedy corporations” for polluting the planet, but we all have a share of the responsibility for pollution.

Science: Understanding how pollution travels and persists in the environment can play an important part in public awareness, education, and applying political pressure. Good science can inform policy and legislation and empower campaigners, but science alone rarely makes much difference.

Technology: There may be superb technological ways of cleaning-up pollution we haven't yet discovered; similarly, there may be ways of avoiding pollution (for example, by switching from gasoline-powered cars to electric ones to reduce our dependence on oil).

Some waste water, fertilizers and sewage contain high levels of nutrients. If they end up in water bodies, they encourage algae and weed growth in the water. This will make the water undrinkable, and even clog filters. Too much algae will also use up all the oxygen in the water and other water organisms in the water will die out of oxygen starvation.

Surface water includes natural water found on the earth's surface, like rivers, lakes, lagoons and oceans. Hazardous substances coming into contact with this surface water, dissolving or mixing physically with the water can be called surface water pollution.

When humans apply pesticides and chemicals to soils, they are washed deep into the ground by rain water. This gets to underground water, causing pollution underground. This means when wells and boreholes to get water from underground, it needs to be checked for ground water pollution.

In many communities in the world, people drink untreated water (straight from a river or stream). Sometimes there is natural pollution caused by micro-organisms like viruses, Bacteria and protozoa. This natural pollution can cause fishes and other water life to die. They can also cause serious illness to humans who drink from such waters.

Some pollutants (substances, particles and chemicals) do not easily dissolve in water. This kind of material is called particulate matter. Some suspended pollutants later settle under the water body. This can harm and even kill aquatic life that live at the floor of water bodies.

Many industries and farmers work with chemicals that end up in water. This is common with Point-source Pollution .These include chemicals that are used to control weeds, insects and pests. Metals and solvents from industries can pollute water bodies. These are poisonous to many forms of aquatic life and may slow their development, make them infertile and kill them.

Oil spills usually have only a localized effect on wild life but can spread for miles. The oil can cause the death to many fish and get stuck to the feathers of sea birds causing them to lose their ability to fly.

Water pollution is bad and it’s not good for people to drink the water that’s polluted and for all organisms that need water to survive.

There are millions of people that don’t have good clean access to water and that they even have to drink the bad polluted water for them it survive, Sewage can cause water pollution along with the toxic chemicals from Industrial business.

There are a bunch of water pollutions like toxic and organic and thermal water. And solutions to stop the water pollution are to clean up the garbage and keep your yard clean.

To try to stop the water pollution clean up your yard and make sure there is no garbage left anywhere around in the area you live like the streets and neighborhood. 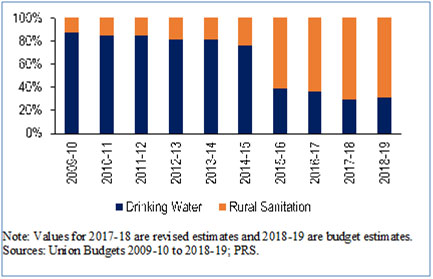 Faculty of Engineering and Technology